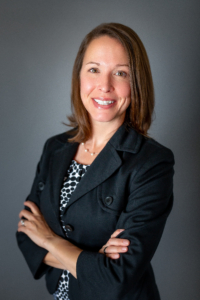 A Texas native, Stacey joined the Army Reserves in 2000.  While in the Reserves, she attended Texas Tech University where she graduated Magna Cum Laude with a BA in Public Relations and a minor in business.  After serving two tours with the US Army in Afghanistan and Iraq (2003-2004 and 2006-2008), Stacey attended law school and she received her law degree from the University of Colorado, Boulder in 2011. During and after law school, she worked as a defense contractor in Washington, DC and in Denver where her work focused on information sharing and collaboration policy issues between the various intelligence agencies.  She eventually made her way to the Roaring Fork Valley where she practiced immigration law in Glenwood Springs before moving to an in-house counsel position with a private family office in Aspen.

Stacey earned her LL.M. taxation degree from Villanova University. She is also a member of the Colorado Bar Association.  Her practice at Otis & Bedingfield, LLC focuses on business and real estate transactions.