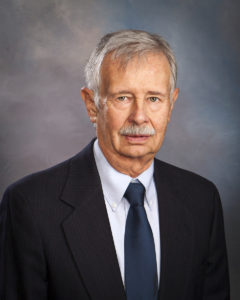 Don has lived in Greeley since 1973. Don’s practice focuses on real estate transactions, wills, trusts, estate planning and probate administration. He also works in municipal law, having represented numerous small towns in Weld County over the years. Don received his undergraduate degree and his law degree from the University of North Dakota. Don is admitted to practice in Colorado, North Dakota and the United States District Court for the District of Colorado. Don previously served as a Municipal Judge for various municipalities in Weld County for more than 25 years and has served as a Town Attorney for more than 35 years. Don is a member of the Colorado Bar Association and the Weld County Bar Association.

Between his undergraduate work and law school, Don served in the Aero Rifle Platoon, Air Cavalry Troop, 11th Armored Cavalry Regiment in the Republic of South Vietnam. Don continues to be active in the American Legion and serves as counsel to Honor Flight Northern Colorado, and is a long-time member of the Greeley Optimist Club and the Greeley Chamber of Commerce, where he serves on the Local Government Business Affairs Committee. When not working, Don enjoys his grandchildren, hiking in the mountains, bird watching and gardening.